Simulation Of Massive MIMO Beamforming In An Urban Small Cell 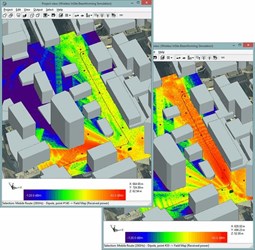 Multiple Input Multiple Output (MIMO) is a key technology for future 5G systems.  This includes Massive MIMO, which would use large antenna arrays to transmit data to multiple devices within a small cell in the same frequency band.

This webinar uses Wireless InSite’s MIMO simulation capability to predict the multipath and channel characteristics for a Massive MIMO system in an urban small cell.  Beamforming techniques are applied to the simulation results in order to predict the beams to several mobile devices and observe how the beams change as one device moves along a route through the city.

The performance of each technique is evaluated in terms of the received power and the signal-to-interference-plus-noise-ratio (SINR), including an example demonstrating the potential impact of pilot contamination.

Emphasis of the talk: