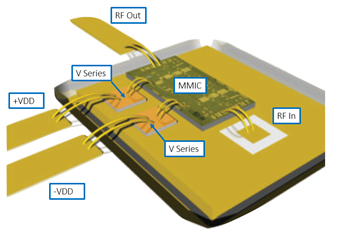 The new V Series capacitors deliver increased broadband rejection in a significantly reduced footprint for bypass capacitor filtering networks.  Released under the DLI brand from Knowles Precision Devices, this cost-effective capacitor line is built on a compact 30 mil by 30 mil footprint.  This superior RF signal blocking design tool will solve the needs of design engineers looking to decouple RF signals from DC bias lines in active circuit designs, such as MMICs, or filter out noise from switching power supplies.

The V-series capacitor family is designed to provide superior broadband rejection in decoupling and filtering applications. If DC lines are not properly decoupled or filtered, RF signals can inject RF power into other components within the system 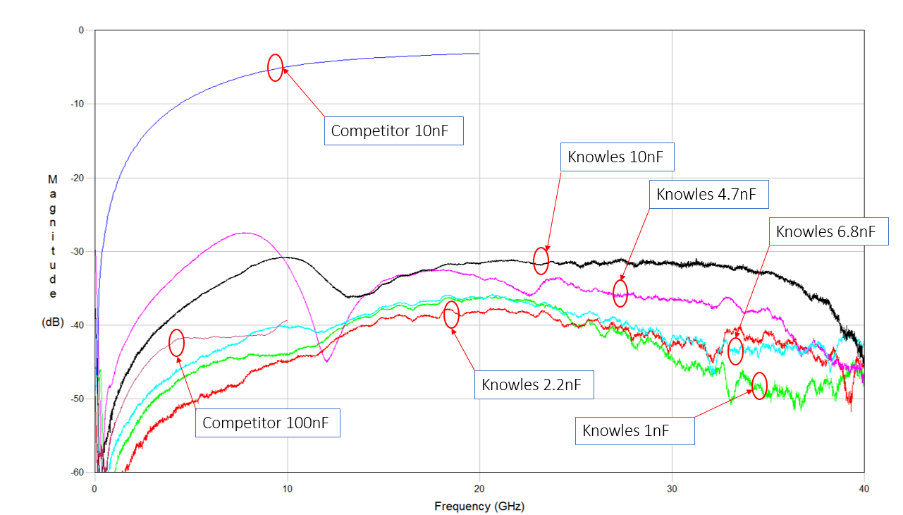 causing severe performance degradation.  The new V Series DLI capacitors provide as much as twice the rejection when compared with the available alternatives typically used in these applications. For example, at 10GHz a 10nF V Series component provides over 30dB of rejection, whilst a standard alternative 10nF capacitor would provide only 6dB. The V Series capacitors are all designed to provide a minimum of 27dB of broadband rejection out to 40GHz.

In addition, they offer increased voltage ratings compared to alternative devices of a similar size and do not sacrifice RoHS compliance in exchange for performance.

Note: Dielectric Laboratories (DLI), Novacap, Syfer Technology and Voltronics came together to form a single organisation, Knowles Precision Devices – they have now been joined by Johanson Manufacturing and Compex.  This entity has a combined history exceeding 200 years and is a division of Knowles Corporation of USA, an independent publicly traded company.