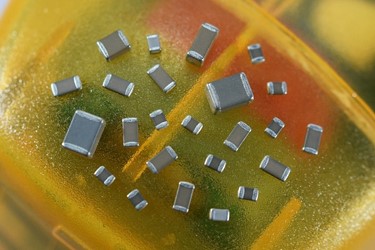 Automotive is one of the strongest growing markets for electronic components worldwide. AEC-Q200 compliant components are consistently being designed into automotive systems such as EV power train and battery management, infotainment, engine control, air bags, lighting and more. The demand for ‘off-the-shelf”, yet highly rugged devices is expanding fast, and in many cases outstripping supply. Not so at Knowles Precision Devices (KPD) where product development is not only keeping pace with Automotive designers, but production capacity is being ramped up.

Under the Syfer brand, the AEC-Q200 series of MLCC capacitors has had a range extension increasing the available working voltage from 2kV up to a maximum of 4kV. Designed for EV applications where ever higher voltages are needed, but where a margin for derating has to be accommodated for - ideal for power train use, like battery management and invertors. Available in X7R dielectric, and with capacitance up to 22nF, this extension joins an already comprehensive offering of Syfer AEC-Q200 qualified MLCC capacitors and complements the extensive AEC-Q200 qualified components KPD offer. Available as standard with KPD’s lead-free, RoHS and REACH compliant, FlexiCap termination for crack prevention and high number thermal cycle withstand.

For those automotive applications that require High Q, low loss MLCC’s the Syfer branded ‘X8G HighQ series now also has AEC-Q200 qualification. These low ESR HighQ parts are manufactured with a Copper electrode for optimum performance at high frequencies and are rated to work over the temperature range -55ºC to +150ºC. The capacitance range of 0.3pF to 100pF is covered, with rated voltages up to 500V. They will also find a home in many other applications such as networking & wi-fi, as well as use in safety systems such as radar. Again, lead-free RoHS and REACH compliant termination options.

Note: Dielectric Laboratories (DLI), Novacap, Syfer Technology and Voltronics came together to form a single organisation, Knowles Precision Devices – they have now been joined by Johanson Manufacturing and Compex.  This entity has a combined history exceeding 200 years and is a division of Knowles Corporation of USA, an independent publicly traded company.