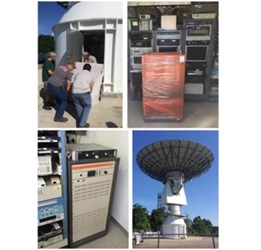 On August 12, 1978, the International Space/Earth Explorer 3 (ISEE-3) spacecraft was launched as part of a mission to study the interaction between the earth’s magnetic field and the solar wind. ISEE-3 achieved a number of milestones during the 36 years in which it monitored the particles and fields between the earth and its sun. With the news that NASA could not afford to recover the spacecraft, a group of retired and active aerospace engineers as well as a number of space enthusiasts banded together to revive the vintage spacecraft. Their goal, known as the ISEE-3 Reboot, is to use ISEE-3 to gather information for citizen science. The team has raised almost $160,000 to date through crowd funding.

One of the hurdles the group had to overcome was that the equipment necessary to transmit signals to the spacecraft had been decommissioned in 1999. The equipment is far too expensive to replace, but AR RF/Microwave Instrumentation, along with several other companies, stepped in to help. A power amplifier was needed and AR provided a 700-watt transmitter. The Model 700S1G4 is a portable, self-contained, air-cooled, broadband, completely solid-state amplifier designed for applications where instantaneous bandwidth, high gain and linearity are required. It’s designed to operate at S Band frequencies (2.0.2.2 GHz for this application).

About AR
AR Competitive Edge products supply a multitude of unique RF solutions to companies around the world.  Our limitless support and service network reaches the far corners of the globe. When companies purchase from any AR company they have the peace of mind that comes from knowing that we will be there to provide cost effective solutions and help with any problems that may arise today, tomorrow or in the future.